Andrew Tarr and his Jimny 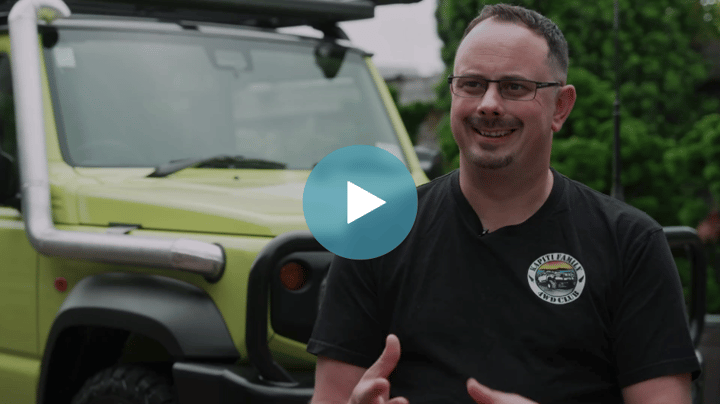 Andrew, part of the crew at the Kapiti Family 4WD Club, just loves going on adventures with his son in the Suzuki Jimny. We took a few moments to chat with Andrew and found out how this little Suzuki 4WD has made a big difference in his life.

Click here to watch the video of Andrew and his Jimny.

Tell us a little bit about yourself?

I’m Andrew and I’m the proud owner of this Jimny. It’s a great vehicle and I have had for about a year now. I’ve been on a lot of adventures. It’s been really good fun and I just love it to bits.

Why did you choose Suzuki over other brands?

I’ve owned Suzuki motorcycles for many many years, and I’ve seen a lot of changes in Suzukis. The reliability and the cost of ownership is quite low for Suzukis. If I have to go and get some parts, they are great for the parts service, overall it’s a good small reliable package that you can buy and you’d don’t have that huge cost later on if something goes wrong. They are quite easy to maintain and fix, which is important if you are going four-wheel driving.

For a long time I was looking for something that was going to be used for going on adventures. I’ve spent a lot of years sailing and I have now retreated back to land and I want to go and explore. I was looking for a vehicle that I could use off road, with my son and go travelling around New Zealand and that’s what I bought it for.

Originally I was looking at Land Rover Defender but as I investigated more it didn’t sort of fit the ball quite right and then I happened to be driving past Suzuki and saw the Jimny. It was just awesome. Fell in love with it as soon as I drove it.

What do you love about your Suzuki?

It brings me back to a day of what it was like when I was younger. It’s got a manual transmission, because of the suspension and the 4WD set up the steering is not as responsive as a modern small car, but I like that. It feels like you are really connected to the road when you are driving it. It gives me a lot of nostalgia driving a Jimny in some ways even though you’ve got all of the modern stuff.

How would you describe your Suzuki to your friends?

It’s a little truck. It’s fantastic. It’s a bit interesting and it’s hard to explain what it’s like to drive a Jimny. There are a lot of characteristics that it has that are like a vehicle I used to drive back in the olden days. It’s a little bit nostalgic in that sense, but it’s got all of the modern amenities in it and then you get the systems for when you’re going off road that are fantastic.

Why was your Suzuki Jimny the right fit?

I am living with my son and we wanted to go adventuring. We wanted a small compact car that was easy to manoeuvre around in tight spaces.

The other cars were cars, but this one is fun and you can’t drive a Jimny without a smile on your face. It’s just awesome.

I don’t ever see myself selling it. I’m going to hang onto this. This is going to be one of those cars I always own and it’s going to be project car. Later on I might have a day to day driver of some sort, but this is going to be my special car that I can take away and go adventuring and exploring with.

How has owning your Jimny made a difference in your life?

It’s opened up opportunities. Before this I had large cars, mainly sedans so they were just a car, lovely but just a car. This has given me the opportunity to join a 4WD club.

When I originally bought the Jimny, I wanted to change the tyres on it quite soon after buying it and I went down to a guy who was able to sell me some 4WD tyres and funnily enough he was starting a 4WD club. So we actually started right at the beginning, starting a family 4x4 club. It’s been great. We get out and do BBQs in the bush. It’s great for my son and I to spend time together and it has opened a whole lot of opportunities and a whole lot of new people to meet.

Describe the experience you had buying your car?

It was a bit funny actually, I went down to Suzuki and this was when the Jimnys had just appeared, so there wasn’t the huge demand like there is now.

I said to the salesman, ‘I really like that’ but I’m conscious that I am a bit of a picky buyer, so I wanted to know that I really liked the car. So, I said to him ‘If I can take that car home and borrow it for the evening and bring it back, I’ll probably buy it.’ He was bit hesitant at first, but said ‘That’s fine’.

It was great though that they were able to let me spend a bit of time in the car. Make sure it fits in the garage and all that sort of stuff. And sure enough next morning I came back and I just went ‘Where do I sign?’

This is my day to day driver. I use it when I need to go to and from work. I also use it in the weekends for off-roading, towing trailers, towing boats, doing all sorts of crazy stuff with it.

Over the next six months I hope to be out camping with it and doing some overlanding down the South Island.

What's some advice you would give to someone looking to buy a car?

Spend a bit of time driving one first if you can. You’ve got to love it.

One of the things about the Jimny is it’s awesome to drive, but it is different from a normal car. The feel is different. You are driving something that feels like a small little truck. The other thing is you need to learn to live with the small space. It’s a given, but if you get smart with it, you can use it for everything.

If you can just experience it first, learn a bit about it and I think you will fall in love with it.