Lloyd Mathews and his Swift 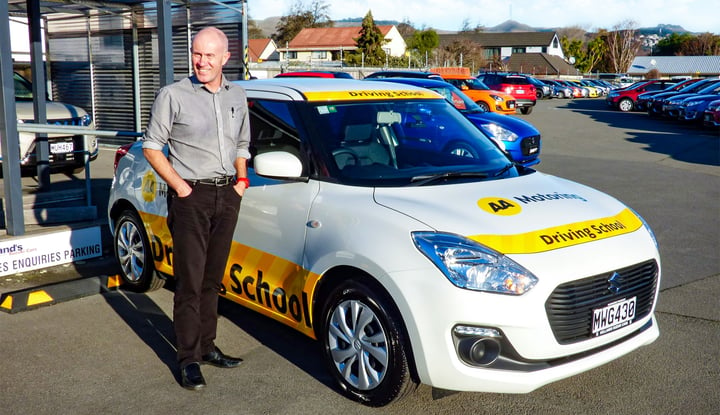 With over 500,000 kilometres in a Suzuki Swift under his belt, AA Driving Instructor Lloyd Mathews is completely comfortable behind the wheel of a Suzuki. We found out from Lloyd what makes the Swift his reliable all-rounder.

Tell us a little bit about yourself?

Hi, my name is Lloyd and I’ve been an AA driving instructor for over 20 years. For most of that time I’ve driven Suzuki Swifts and have travelled over 500,000 kilometres in them.

Is this your first new car?

No, I bought my first Swift directly off Hollands Suzuki in 2008. I’d heard radio ads about a deal that was coming up and I was due for a new vehicle. I liked the look of the Swifts and they had a really good half now half later – or half in two years deal at 0%. So it cost me about 10 grand to get into a new car sort-of on the spot. They had a car in stock and I pretty much purchased it straight away. It was dead easy. And then I just paid the rest of it in 2 years time and away I went.

With subsequent Swifts we've enjoyed excellent pricing via the official relationship with the AA and Suzuki NZ and in real dollar terms the prices are virtually the same as when I purchased my first new work vehicle in 1996. Just good plain value for money.

What do you love about your Suzuki Swift?

I've been fortunate to have regular new work vehicles and the reliability and reduced costs that go with that. The Swifts have been great for long journeys also. (They still flatten the battery though when you leave the key in all night – call the AA!)

Why did you choose Suzuki over other brands?

I'd always liked the look of the Swifts and the pricing was spot on when I bought the first one. Then it became the vehicle the AA recommended to purchase. Which I liked because I’d had the 2008 Swift.

Why is your Suzuki Swift the right fit?

I do a few private journeys in the car as well – particularly out of the city. They go really well on a long journey, so I was really interested to take delivery of the next Swift and not only use it for work of course, but to get out of the city over to the West Coast.

The Swift will go anywhere and it's dead economical. It handles well in the bends, it's a really nice sporty drive, and we give it a bit of a tickle up along the way. I really enjoy it.

It is also nice to have that option to spread the miles between the S-Cross (my other car) and the Swift.

How do you use the car day to-day and on the weekends?

In the past I’ve done all the early starts and the late finishes as a driving instructor. But I’ve been in the job a while so I’m just doing a bit of gentlemen’s hours now, heading away from home by about 8:30 to 8:45 am.

Describe the experience you had buying your car?

Because of the relationship Suzuki has with the AA driving school we purchase them directly through Suzuki.  We just placed the order through our head office team – specifying the vehicle we want. Kevin Loft (a manager with Suzuki), contacted us and let us know the approximate delivery time and I just let them get on with it. The delivery was prompt, on schedule, and as straightforward as you can get it really.

When we purchase the cars they’re pre-fitted with dual controls and a security camera and all the graphics etc. Everything’s done. They send it down to Hollands and I pick it up from there.

In fact when I got to Hollands it was the first time I had seen this car. And of course they had it all polished up beautifully and I was really impressed. From the moment I saw it I thought “that looks really sharp”.

They’re a good bunch over there in the sales and the service department and even though we’re not purchasing it through the dealer as such, the process is very straight-forward.

I'll be heading to Rangiora to my next lesson which is only 10 minutes away and in a few weeks I'll be heading down to Queenstown in the Swift, which I'm really looking forward to.

What's some advice you would give to someone looking to buy a car?

If you’re in for a brand new car, then certainly look for a car that has all the standard safety features these days. Check that they are a safe car in terms of the crash ratings. You’ll find even your base specification car will have ABS braking and other traction control features.

If the vehicle doesn’t have a reversing camera on, see what sort of visibility is available when you turn around to the sides or the rear.

And source from somewhere you know you’re going to have backup if things do go wrong, where you can get a warranty that is real and is going to really help. Obviously with all the new cars I've had, we’ve had the manufacturer's warranties but even beyond them we’ve not really had any issues.